These are zipped folders of frequency files for the Atelier Robin function generator line. They are now broken into individual folders depending on their parameters. Folder names which start with F100 are for plasma devices such as EMEMs and Rife-Bare machines where no carrier frequencies are used, so it does not matter whether the function generator is an F125 or F165. The folder names indicate runtime parameters such as main duty cycle (50% or 70%), and whether they run with a fuzz (sweep) of range 1Hz by 0.0333Hz or 3Hz by 1Hz and whether they are Z or ZZ files. Note that various files from any folder can be loaded into a function generator at the same time but they are broken apart here for clarity. See text and the link to the function generator manual below for further information. Folders can be custom made to use any global parameters of duty cycle, converge or fuzz parameters, pulse duty cycle, offsets, etc - use Contact button in main menu bar above for inquiries.

As of 8/21/2007, the F165 Pad files below have been updated to make use of all three channels of the F165. Channel B is used to run the main program, channel C is used to run the carrier frequency, and channel A provides the pulsing (gating), usually at 4Hz. Note that the F125 has the limitation of not allowing pulsing when a carrier frequency is used, as they are in the F125 Pad files. Some think that this pulsing, usually at 1 or 4 Hz in the Electroherbalism files, may be more important than using a carrier frequency in which case using F100plasma70 files may be more effective for pad device use.

F100 folders are made for plasma devices like Rife-Bare since they don't have a carrier. Plasma devices such as the Rife-Bare have a built-in RF carrier and don't typically run well with an additional carrier provided by the function generator. They can also be used on pad devices although F125/F165 folders may work better on some pad devices since they run the same frequencies with a carrier that is a multiple of the original frequency although the F125 files don't have a pulse.

F125 folders are made for pad devices. Most run frequencies with a carrier equal to 128 times the base frequency.

F165 folders are made for pad devices. They run frequencies with a carrier equal to 1024 times the base frequency. 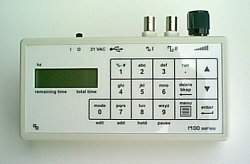 An Atelier Robin function generator is excellent as a "rife" pad device since it will operate in standalone mode. It has two outputs, one TTL (always 5v) and another which is adjustable from 0-12v (or -12 to +12v in biphasic mode, which is not typically used for pad devices). It comes with a power supply and a USB cable that is used to load the frequency files from a PC, but it does not include lead cables or electrodes to allow it to be used in pad device mode. A company called Pacific Health Products uses an F125 as the base for its pad device called the Programmable Blaster which does include the cables and handhold electrodes (plus foot plates) for it to be used in pad device more. See the page Recommendations for those who want to explore bioelectronic devices for more information.

The F100 User Manual is provided at the Atelier Robin website which defines and gives examples of commands like converge and fuzz. FRQ files run directly in the latest generation generators like the F125 and F165 while PDB files are necessary to load into a Palm computer for older model generators such as the F150 and F160 being driven by a Palm. FRQ files are used when driving the generator using a PC running the F100 Windows interface in either old or new models.

The latest folder dated 2007-04-12 includes Z and ZZ files for use on the F125 generator. There is a "standard file" and a Z file for every frequency set in the folder. The Z file has the same main audio frequencies as the plain file but also adds a proportional carrier signal equal to 128 times the main frequency to possibly boost effectiveness. ZZ files add specific carrier frequencies based on Hulda Clark or Royal Rife frequencies along with the standard audio frequency. Note that Z and ZZ files are NOT for use to drive standard Rife-Bare or EMEM generators, they are for pad devices. They probably won't hurt anything but they don't provide the standard audio range signal that most plasma tube devices require to operate effectively. Standard files can be used for any purpose whether to drive a plasma tube device or for a pad device.

The characters "Z" and "ZZ" prepend files which use a carrier frequency. This keeps them segregated in file listings so if only standard or only Z and ZZ files are desired to load onto to the generator or copy to another folder, it is easy to select all of them at the same time. It is certainly possibly to copy all of 550+ standard, Z, and ZZ files to the F125 with no problem. However, the method of opening the files on the F125 provides 10 indices, 0 through 9 - it divides the file list in 10 parts and when you hit 1, you go 10% down in the list, 2 to go 20%, etc..Once you get to the filename that happens to be at that index, you press the up or down button to navigate to the file. Loading all the files means that the indices as 55 filenames between indices so that an index may be as much as 28 files away from the desired file to load. I am making this sound onerous, but it is really not. You can just hold the up or down button down to scroll through the files, and even with all the files in there it still only takes a max of 30 seconds or so to load and start the run of a file, but the huge list is confusing to some people. Of course, average people might just want to pick and choose various sets that they need at that time and only keep a minimal list of a few files in their generator.

Download folders like the ones below were all named with F100 preface until Z and ZZ files were developed. Since the parameters for the Z files differ depending on whether the generator is the F125 or the F165 with its higher frequency range, the folder names indicate the intended generator. F165 Z files can run with a carrier frequency of 1024 times the main audio frequency while the F125 files run a carrier of 128 times the main frequency.

A note on loading the F125 with multiple files. The F100 Windows program (see below or the Atelier Robin website downloads section to download) has two major functions. It can be used to control the F125 real time, or load the frequency files into it for standalone operation. To download, select File -> FGen -> Copy to FGen. A window comes up and just clicking on various files you might think you can only load one file at a time. But you can load multiple ones, or all of them. To load a few files in the list from various places, click on one filename then hold down the control button on the keyboard while selecting more. Once all the desired files are selected, choose Done (of okay, whatever it is called) and all the selected files will be downloaded. To select all the files, move the slider at the bottom of the Load File window all the way to the right. Put the mouse cursor at the bottom right of the load file window, press down the mouse left key, and drag it to the top left of the window (it will automatically scroll and make a "lasso" box). This selects all the files. It is a little tricky at first, but after a minute's practice it is easy. To download certain sections of files (like all the Z files for example), the same technique is used, adjusting the "lasso" to encompass the desired files. Once a batch of files is selected (release the left mouse button), the keyboard control key can be held down while deselecting files that are not desired to load with the mouse left button.

Download F125 Fuzz 1 0.0333 Folder, dated 2007-04-12 Now includes Z and ZZ files for pad device use. See Introduction section above for more information. Does not include PDB Palm Files, only FRQ files. Most frequency sets in this folder run most frequencies with a fuzz of 1 0.333. Note that the TrueRife files (the filenames prepended with "TR") included in this set use varying pulse and main duty cycles and mostly run a converge x 0.0312345, so may not be appropriate for Rife-Bare generators that require only a 50% main duty cycle, while the rest of the files generally run with a 50% main duty cycle, 62% pulse duty cycle, and fuzz 1 0.0333.

Download F100 Converge 10 1 folder dated 2004-09-24 Includes PDB Palm files. Frequency sets which run most frequencies with a converge of 10 by 1 and 50% main duty cycle, 62% pulse duty cycle. General frequencies at the beginning of sets run with a 4Hz pulse rate and the remainder run at 1Hz pulse. Can be used for plasma tube generators including Rife-Bares and pad devices.

Download F100 Fuzz 1 0.0333 folder dated 2004-12-15 Includes PDB Palm Files. Frequency sets which run most frequencies with a fuzz of 1 by 0.0333 and 50% main duty cycle, 62% pulse duty cycle.General frequencies at the beginning of these sets run with a 4Hz pulse rate and the remainder run at 1Hz pulse. Includes many of the TrueRife frequency sets (prefixed with "TR") modified to be able to run on Palm computers by stripping most of the comments and changing incremental frequencies to be within range of the Palm, for example changing converge x 0.03125 to converge x 0.0333. Note that many ofthe TR files in this folder will not drive Rife-Bare plasma tube devices which require a 50% main duty cycle.

Download F125 TrueRife Folder dated 2007-04-12 Includes the latest TrueRife files which are used to drive their EMEM-type device which uses an F125 board as the frequency generator.. Although these sets are designed to drive their EMEM-type machine, they are also good when using a F125 or F165 as a pad device. They are not designed for Rife-Bare devices which require a 50% main duty cycle (many Rife-Bare devices no longer require a 50% main duty cycle to operate properly including those using Jim Bare's OM-1 transmitter.) Note that the filenames in this folder are NOT prefixed with "TR" as they are in the folders above.

Contact turf@mindspring.com for custom F100 sets made to your specifications.

This folder contains software and data files for the first generation Atelier Robin F150 function generators that need a PC or Palm to control them. It includes the old F100 PC program (which will convert files to PDB format for loading on a Palm), BAT and macro files for converting frq files to pdb in batch mode, preconverted PDB frequency files, the F100 Palm program and data files (jar, pdb, prc). Note that Atelier Robin no longer provides support for the F150 or its software.

This folder contains software and data files for the first generation Atelier Robin F160 function generators and is a later version than the one above, includes TrueRife files converted to Palm format. Note that the Z files in this folder use a harmonic factor of 1024 (instead of 128 for the F150 files).