Introduction to the Electroherbalism Frequency Lists

All frequencies in the CAFL and NCFL are in Hz, unless otherwise noted.

The latest versions of the CAFL and NCFL plus a few articles are also available in a paperback book called The Electroherbalism Frequency Lists. Click here or on the bookcover picture below for details. Note that there is nothing in the book which is not also available on this website. 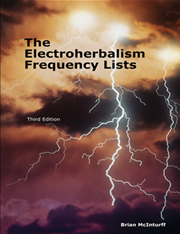 Warning: This information is not intended to diagnose or treat any illness or medical condition and is for educational and historical purposes only.

The two major Electroherbalism Frequency Lists are the Consolidated Annotated Frequency List (CAFL) and the Non-Consolidated Frequency List (NCFL). The NCFL was compiled first. It consists of various and sundry frequency lists collected over the years. Anecdotal frequencies posted to some of the internet rife listservers have also been collected since the early days of the internet. These were stored in the Electroherbalism archives. In the late 1990’s, an effort was made to consolidate all of these frequency lists along with the anecdotal frequencies, some well tested and some not, into a single list. Some basic annotations were added, it was put into tabular form, and the CAFL was born.

The CAFL contains the frequencies from many sources combined into one list. Besides the anecdotal frequencies which can not be found on any other list, it includes early Garvey sets (some which have been converted for use on audio range devices like Rife-Bare machines and EMEMs) as well as more modern frequency sets from researchers such as Don Tunney of Resonant Light Technology and Michael Tigchelaar of TrueRife. A problem with the CAFL is that the sets for even minor maladies can be quite long. However, all frequencies found were included in the hope that at least one in a set would be beneficial.

Since the NCFL is composed of many of the original lists which were combined to produce the CAFL, it can be valuable for viewing concise frequency sets. It does not contain anecdotal frequencies, some of which are the most beneficial since they have been developed most recently. The NCFL does contain frequencies and other information not included in the CAFL, including empirical muscle frequencies, mineral frequencies, original Royal Rife frequencies, Hulda Clark's frequencies converted into audio range, and lists of "codes" for function generators which hide the frequencies from the user.

The frequencies in these lists are not well tested. Some are from pad device sets, some are from homeopathic nosodes, some may be what worked for a single researcher, and some may be mere speculation. Do not stake life or health on them. They are a starting point for research.

There are other frequency lists such as the Crane and Keelynet lists, but these were mostly excluded from the Electroherbalism lists since they are generally composed of different combinations of general frequencies that are typically run often, i.e., 20, 728, 784, 800, 880, 5000, 10000Hz. This is not to say these frequencies are not important - they are in general the most important frequencies that address the most common pathogens and conditions, so are widely used in many sets, especially general frequency sets.

Many of the frequency sets address the symptoms and only marginally if at all the cause, just like in allopathic medicine. For example, the IBS (irritable bowel syndrome) frequency set may help balance gut bacteria levels and perhaps alleviate some intestinal spasms, but may not include the frequencies for giardia or other parasites, which could be a factor. The hepatitis C set does not include the frequencies for the blood fluke, schistosoma mansoni, which may be a factor in some if not most cases, according to Hulda Clark’s research. Same with chlamydia, herpes 6, and parasites as being potential causative factors in MS.

The CAFL attempts to deal with this problem by providing notes of other frequency sets which may help. Despite filtering, some of the sets contain only general frequencies such as 727/728, 784/787, 464, and 880 when those are the only ones which have been used and found to help. These four frequencies do address a wide range of bacteria, viruses, and fungi. In this respect they may nonetheless help almost any infectious process by removing common pathogens and therefore assisting the immune system since there will be more cells available to concentrate on the "uncommon" pathogens which were not directly addressed in the set. Many people run these four general frequencies in every set regardless of the condition.

Frequencies in the 2000-2200 range are thought to increase the activity of the immune system cells as well as improve blood circulation, so these can also be helpful in any infectious disease, even if they do not address a condition directly. When there is limited time and one will run a session which must include frequencies for many different maladies, some experienced users choose the concise Garvy frequencies along with a basic set of 728, 784, 880, and 464. Garvy frequencies are listed separately in the NCFL. When there is plenty of time, one might run the complete set from the CAFL along with any causative factor sets which are listed.

Hulda Clark's frequencies may be useful if a specific pathogen is known. These frequencies are in the 80- 900 KHz range, so cannot be run directly on most Bare-Rife generators or EMEM devices. The most common method used to convert frequencies which are too high to run on an audio range device is to divide by two until the frequency is in range. This method can also be used on Garvy frequencies which are out of range. Pad devices can usually run these higher frequencies directly, which may be of benefit.

Another method used to convert out-of-range frequencies is described by Rife researcher Jeff Sutherland. He asserts that it is much more effective to divide the frequencies by the constant e (2.71828183) raised to the 3rd or 6th power. A list of Hulda Clark frequencies converted into audio range using this method is provided in the NCFL. 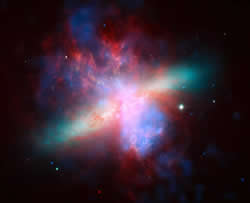 Most people run frequencies three minutes each. For a 20 frequency set, this would be an hour long session. Higher powered devices (100W+) may require less time on each frequency. When a frequency is found to be particularly beneficial it may be run for a longer time after assessing detox reaction to ensure it is not too strong.

Scans and sweeps can be effective for determining new frequencies, as well as therapeutic in themselves. Running scans is feasible only with a programmable function generator since manually entering a single frequency every few seconds hundreds of times in a session is not practical. Some of the best ranges for scanning are 300-800 and 2000-2600Hz. Each frequency in a scan is run for 1 to 10 seconds. Any "hits" are noted and after the session these frequencies are run for a full three minutes each. Hits are any frequencies which cause a sensation, such as tingling, pulsing, tickling, itching, etc.

Note that many times (if not most of the time) frequencies which are beneficial may not cause any sensation. And, many times frequencies which are “hits” may cause no apparent benefit. In general, though, frequencies which produce consistent hits over multiple sessions are usually therapeutic, and should be included in sessions until they no longer do. If any frequencies are found to be particularly effective and are not yet listed for a condition, please report them to turf@mindspring.com for possible inclusion in the CAFL or a Frequency Anecdote file.

Values in the lists are given in Hz unless otherwise noted. There is, in general, nothing special about the order of the frequencies inside frequency sets.This data was compiled from many electronic sources verbatim (except for some annotations) and there is no guarantee of any beneficial effects - most sources of the data were questionable but all frequencies found were included in the hope that at least one in any given set would be helpful.

Sets in the CAFL with a numbered annotation such as _1 or _2 are anecdotes and often contain newly discovered frequencies so may be the most effective in some cases.

Frequencies marked with an asterisk (*) in the comments section are thought to be particularly effective.

Sets appended with “_v” are Vega sets, many originally developed by John Garvy of the Son Ridge Health Center as well as his successor, Peter Kapetanakos of the Carolina Health Center (www.carolinahealthcenter.com).

Set names appended with “_TR” are courtesy of TrueRife.com.

Sets appended with “_comp” are comprehensive sets which include most or all of the frequencies for that condition.

Sets marked with “secondary” and “tertiary” are those which may be helpful to increase the effects of the main set or to address less common causes of the disorder.

“See other” sets, listed in the comment sections, indicate those sets that may be helpful as a compliment. “Use other” sets indicate both alternate nomenclatures for listings as well as additional sets which may be necessary to thoroughly address a problem.