Royal Rife was a scientist who developed and tested most of his inventions in the early to mid part of the 1900's. He was persecuted for his work, his lab burned down, and most of his notes destroyed. However, there were some that survived. The story of Rife's inventions and legal troubles is detailed in the Barry Lynes' book called The Cancer Cure that Worked and in the short article Morris Fishbein. A short biography of Rife is provided on this page. Stan Truman's and other websites have historic papers and some videos of Rife. There is more information on these topics in the Rife Bare Section Links.

The Rife Bare device was invented by James Bare after studying Royal Rife's work. Bare's Rife generator may produce some of the same beneficial effects of the original Rife device using modern electronic components. It may or may not be as effective as the original. It uses audio frequencies like many bioelectronic devices do, but instead of just holding onto the outputs of a function generator or other pad device, the audio frequencies are combined with a radio frequency (RF) carrier signal, amplified, then output to a "plasma tube" which is a sealed glass tube usually filled with mostly argon and some neon gas. This tube emits "the beam" and cannot be touched since it will cause RF burns.

Although some high powered devices with large tubes can radiate the beam for a hundred or more feet, it is generally recommended to sit closer to the device, some say as little as 3 to 6 feet, for the greatest effects. One should not sit very close (less than 3 feet) to an operating tube for a long time due to the RF effects, but it is generally safe in this respect since holding one's head at 18 inches from the tube is the RF equivalent of using a cellular phone. 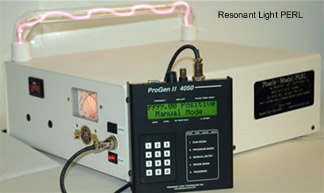 Many people build their own devices using the instruction manual James Bare sells on his website and usually with some help from the friendly folks on the rife listservers. Some buy the device from one of the main two manufacturers of them, RifeTechnology Inc, who sells the most, or Vibrant Health, a.k.a Dave's Electronics. See the Links section. Building one can cost in the $1500 or more range if a nice programmable function generator is used. Buying them already constructed and tested starts around $3000 (prices at the start of 2002). {Oct 2002 note: Rife Technology is no longer allowed to sell devices the those in the US. They still sell the premodified components for making construction much easier, though.}

Using the correct frequencies is the key to success with the devices. The "master list" is called the Consolidated Annotated Frequency List, or CAFL. It is probably the most-used resource for frequency researchers. Electroherbalism is the keeper of the CAFL and it is available on this website in the Frequencies and Anecdotes section. Many if not most of the frequencies in the CAFL are not well tested, though. There is no guarantee of any beneficial effects in using them. If frequency sets are being run and are not effective many people resort to using scans, running sets where the frequency slowly changes, to see if any good frequencies can be found.

Some people can feel "hits" when the device is being used, usually within a few seconds after a new frequency starts running, but sometimes longer. These can occur when a targeted organism or cells cause enough stimulation of nearby muscles or nerves to be felt. It usually feels like a pulsing, itching, tingling, or tickling. Some people feel no hits, even when target frequencies are being used and providing benefit. Some people feel lots of hits even when a session provides no apparent benefit. Feeling hits is useful since the frequencies which produced them can then be run more often or for extended periods until they are no longer felt.

Detox issues are important when rifing. Detox reactions can occur when the kidneys, liver, blood, and lymph are overloaded by processing too much cellular debris after a rife session or any other antiseptic regimen. Common terms to describe it are "flu-like" and "brain-fog." Lymph nodes may also swell. Rifing should never be done if there are still detox symptoms from the last session. If detox is not handled properly, sessions may not be able to be run as often as is necessary to control the problem, in which case all is for nought, so it can be essential. The best single treatment to prevent or treat a detox reaction is The Water Cure. There is also a detailed protocol for it in the Regimens section if even more effect is needed.

Some make the mistake of using only bioelectronics for problems which would be best treated by cleansing, nutritional, or other naturopathic regimens. This is discussed further in the short Bioelectronics article in the Naturopathy Therapies section.

There are many products out there that call themselves "Rife" devices. To most of the serious users and researchers, it is generally an insult to call a plain function generator a "Rife device" but it is frequently done. Some of them are just programmable function generator pad devices which don't even let unique frequencies be run, nor display the actual frequencies, and instead use "codes." What's worse, some of these crippled function generators cost in the $3000 and up range, but they make up for it by making claims like that theirs is the one "true" rife device <g>. There are good programmable function generators that can be used as pad devices in the $500 to 700 range, and have the benefit of being able to be used in a Rife Bare or other plasma tube device if it is later decided to upgrade.