The following description of the Resonant Light PERL is an excerpt from the Introduction to complementary Bioelectronics Therapy Devices chapter in The Electroherbalism Frequency Lists. The complete article is reprinted on this website in Bioelectronic Therapies. 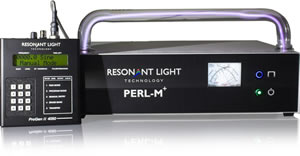 In the early 1990s, Don Tunney working closely with James Bare built one of the first Rife-Bare devices and published results on his website from the public sessions he held in British Columbia. Tunney went on to form the first commercial company which produced these devices for sale to the public - Rife Technology, Inc. since renamed Resonant Light Technology, Inc.

A few other companies have also been licensed by Dr. Bare to build devices to his patent. One is Vibrant Health, a company owned by Dave Trebing in south Florida. Trebing has concentrated on producing the most powerful devices with the widest frequency range. They are well built into a stainless steel case. Vibrant Health offers many options in their unit, including various function generators such as Resonant Light’s ProGen, Atelier Robin’s F125, the Ramsey SG550, and others, although their 2006 top of the line model includes an Atelier Robin F125 mounted on the case. One can also choose tubes of various shape, gas content, and size. The Vibrant Health Rife-Bare devices still include tuner knobs where the output must be tuned for best performance.

Tuners are a bane of Rife-Bare devices to all but the most technically minded. When power is applied to the tube it often does not immediately light, so the knobs are turned to get it to light, then tuned so the device operates at the lowest possible standing wave ratio (SWR), which improves the effect as well as increases component life. When a device is not tuned well the components get hot and can fail. It is usually not necessary to tune a Rife-Bare device if a piezoelectric starter is used. A common gas grill lighter is an example of a piezoelectric starter. The spark it produces will usually stimulate a tube enough to light it so no tuning is necessary. When this is done, it is not necessary to tune the device every time it is turned on unless the tuner knobs are inadvertently moved. At one time, Electroherbalism sold a tube rack with a built in piezoelectric starter so tuning did not have to be performed on a regular basis.

Early Rife-Bare devices produced by Resonant Light had this same limitation. Their first commercial device had discrete components - the tuner, power supply, CB (modulator), and amplifier - stacked upon each other with a vertically mounted tube hanging on the side. Health Canada put pressure on them (likely originating from the FDA) regarding selling these prebuilt units for health purposes so they put them in kit form where the customer constructed the components together before use. This was not an ideal solution.

Resonant Light continued research on their devices, and working with Health Canada as well as the ISO

standards boards, began producing a Rife-Bare device that met Health Canada’s criteria for a class II medical device, approved for pain control. Their current device, as of 2006, is the PERL model. It is professionally constructed into a steel case and has an innovative “stubby U” tube made especially for the device. The best feature, though, is that it is the first Rife-Bare device that does not have tuner knobs. Nothing to adjust, nothing to inadvertently bump, nothing for kids to fiddle with that can cause expensive equipment failure.

The Resonant Light PERL has a limited power output. Its maximum is around 100 watts. This makes it effective to about 30 feet away, good enough for a large room full or people, but unlike high powered units which may be felt to as much as 100 feet away or more (which may be a problem in some settings anyway). It is the ideal Rife-Bare device for clinical use as well as for in the home for those who prefer the easiest machine to use. It is safe enough to sit within six feet of the device for maximum effects.

The PERL comes with a ProGen II function generator, which does have its programming limitations as discussed above. Each PERL is tested along with its ProGen to ensure effectiveness, though, and Resonant Light does not recommend that other function generators be used with it. Electroherbalism finds that it appears to work just as well with others, such as the Atelier Robin F125, as long as RF interference issues are addressed by using quality, well-shielded cables which are choked appropriately. Another benefit of using the ProGen with the PERL is that up to three ProGens can be ganged together to run three frequencies at once using an optional ganging kit from Resonant Light. This can reduce session times by two-thirds, although it is quite an additional expense.

The Resonant Light PERL represents a pinnacle of research, development, and quality in the world of complementary bioelectronics and is highly recommended by Electroherbalism. Most of the companies in this field produce fine machines and the reputable ones are publicly discussed on complementary health internet user groups, mailing lists, and web forums. There are usually plenty of people willing to share their experiences and other unbiased sources of information are available so research is easy and highly encouraged.

How to program a Resonant Light Progen function generator: