The Vita-Mix, Blendtec, and other Powerful Blenders

Below are two descriptions of the Vita-mix, the most recent reprinted from an affiliate review page and the second which was written for Electroherbalism but which provides useful information on additional functions.

The Vita-Mix was the first ultra-powerful blender sold for home use. It had been a staple in bars and restaurants, and the same motor and other parts were used in the home models. It is highly durable for extreme use. When I was getting started in herbalism, I went through two Cuisinart food processors, two cheap food processors, three home coffee grinders, and a number of other devices I used in the craft. I was hard on them, grinding nuts, herbs, twigs, and other ingredients to make formulas. They always broke down from the extreme use. Then I got a Vita-Mix. I did go through a number of blade assemblies and pitchers, but the motor held up for almost 10 years. Just before my extended warranty was up, the motor stopped working. I had it repaired under warranty and 5 years later it is still going strong. So I am a big fan.

In the almost twenty years since this article was written, another commercial grade blender has arisen to challenge the Vitamix: the Blendtec. They are famous for their series on Youtube called Will it Blend? where non-food items are blended to show the power and durability of their device. See the links section below for articles comparing the two.

In the last few years, relatively inexpensive powerful blenders have been developed which also have the capability to grind vegetables and fruit into a drinkable form. These include the Magic Bullet series including the Nutribullet and the Ninja line of blenders. While I doubt that either of these would last through 10 years of grinding up roots and twigs, plus they have just barely enough power to make a smoothie composed of lot of carrots, they are inexpensive and little investment is required to obtain one. Since they have good reviews, I recommend them for those who want to start whole food juicing for less cost.

The Vita-Mix is a powerful blender that produces drinks which are composed of whole fruits and vegetables. It is the same machine that is typically used in smoothie shops and for frozen drinks in bars. It comes in commercial 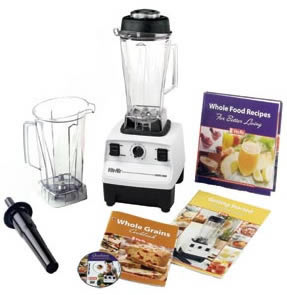 configurations and for home use, but the same durable motor is used in all of them. The Super 5000 series is the variable speed model and comes with two pitchers with blade assemblies - one for drinks and soups and one for dry foods such as grains and herbs. The Vita-Mix does not produce pulp like most juicers so cleanup is very easy, but some liquid like water must usually be added before grinding to make it a drinkable consistency. It supposedly grinds foods to the molecular level so that all the nutrients are easily absorbed, and it certainly includes more nutrients and fiber, most of which is in the pulp, than regular juicers. It is also an invaluable appliance for herbalists. An excellent, fast, and nutritious smoothie is as follows: put frozen berries (strawberries, blueberries, raspberries, etc) in the "wet" pitcher, add a handful of baby carrots or other vegetables, two scoops of a good whey protein powder, and some raw nuts like walnuts or almonds, or flax or pumpkin seeds. Add enough pineapple juice to cover. Grind for about 20 to 30 seconds on high speed until smooth. Makes a sweet smoothie suitable as a meal for both kids and adults. It can also be used to make drinks of the not-so-healthy variety such as frozen margaritas and daiquiris.

A VitaMix, sometimes called Vitamixer, is an expensive blender. It is usually used to emulsify fruits and veggies to make a thick "shake." Unlike typical juicers, there is no pulp produced, it's all ground into the shake, so there's little mess and all the benefits of consuming the pulp, which may be rich in nutrients (and certainly fiber). Ice or water must usually be added in making fruit and veggie drinks since it would otherwise be too thick to drink. It heats up what is being ground, a negligible amount if kept under 60 seconds or so, but in 8 minutes it will make hot soup.

Big problem with the Vitamix is noise. It is the same unit used in those "smoothie" shops that when they first opened, were unbearably loud places. Then, they started encasing them in plexiglass and wood cabinets to contain the noise, which helped a great deal. These cabinets are now available for purchase for home use, and one is highly recommended if the VitaMix will be used daily. If a cabinet is not used, get good ear plugs or a gun muffler headset.

The top of the line model lists for around $650, but they typically give you a $150 discount (2000 prices). And all it is is a 1 hp blender (2hp under load). But, it is so powerful, it can grind something like whole carrots to such a fine slurry (with some water) that they can be drunk. It supposedly even breaks down cell walls and releases nutrients normally unavailable to the body.

With the Super 5000 model, you get pitchers for wet and dry grinding. With the dry pitcher, grains can be ground to pastry-fine flour (but it's a pain to do anything but the smallest amounts.) It can make nut butter, but this destroys it faster than anything - all the people who I have seen reporting problems use them to make nut butters.

I got mine to grind herbs. Having destroyed three Cuisinarts and two coffee grinders making powders for encapsulation out of barks, roots, seeds, etc, I figured $500 was not a bad price if it could do this long term without failing.

In this regard, it has been excellent. It hardly slows down when tasked with small amounts of the hardest roots or seeds. I have been very pleased with its performance.

A new use I came up with for the device was with using the wet pitcher to make instant herb tinctures. No more waiting 2 or more weeks while the herbs macerate. Have a tincture in 5 minutes! This method works best with herbs whose useful components can be dissolved in alcohol. The tincture produced usually tastes so strong that it is closer to an extract and not a tincture.

Fill wet pitcher half full with dry herbs (powdered in the dry pitcher if necessary to get the volume down). Cover with vodka. Grind for 60 seconds or so, or until the mixture just starts to heat up. For extracting components impervious to heat, longer grind times can be used. Keep adding vodka if necessary to form "funnel" so it will be perfectly smooth. Mucilagenous or fibrous herbs will expand and need a lot of vodka.

After grinding, squeeze through cheesecloth (or a clean cotton fabric like t-shirt material.) To futher clarify if desired, drip through coffee filter. When the herb is ground perfectly fine, it will quickly clog a coffee filter and require much prodding to get the stuff through.

This method can also be used to make non-alcoholic tinctures. Use a mix of 50% water, 50% vegetable glycerin instead of vodka. The product will not be clear. It will also be very difficult to strain since the veg glycerin will make it thick and it won't strain through cloth without a lot of pressure.