Before doing any sinus washing, always wash the hands well, and under the fingernails too.

Splash and Blow! Run the water in a sink until it is warm, cup the hands to gather a bit, and splash it up the nose so at least a few drops enter to moisten nasal passages before blowing the nose. This can greatly reduce irritation caused by blowing, especially dried mucus, and make it much more productive. Do not inhale deeply through the nose while splashing or it will cause choking. It is even better when the hands are slightly soapy (use only a non-toxic gentle soap like Miracle 2 !) and the face is washed at the same time. The small amount of soap helps water to penetrate better to wash away irritants and pathogens.

There are many other ways to clean out the nasal passages. One often effective method is to put some Colloidal Silver in a nasal spray bottle and spray as often as necessary. Saline solution can be used instead - put 1/16 tsp Salt per ounce in a 1 oz spray bottle. Either of these when used in a typical squeeze nasal spray bottle should be replaced weekly or kept refrigerated.

Nasal washes can be used for more severe problems. This is running a saline solution through the nose - in one nostril and out the other. Use water as warm as is comfortable. Using too little or too much salt, or the wrong temperature water, or having too high a chlorine level without enough salt in the water, can cause discomfort. A good measure to start with salt in nasal washes is 1/4 - 1/2 tsp per cup of water. For long term use, get a non-toxic salt like Baleine. Do not use any potassium salts (like potassium chloride), only sodium, since potassium salts are irritating. Real Salt is often recommended by Electroherbalism for many purposes, but for nasal washes it can be more irritating than a processed salt like Baleine.

A Neti pot is a small genie-lamp-looking pitcher. It is available at some health food stores. Himalayan Institute makes the classic style shown at

left. Warm saltwater is put into it. The spout of the pitcher goes in a nostril, making a leakproof fit (Netis come with various size spouts - look for one that fits.) The head is faced down and to the side over a sink with the spout in the upper nostril (make it the least-clogged side first). The pot is raised so the water flows down into one nostril and out the other. It can be a sputtering and unpleasant experience the first couple of times until one learns to relax the nasal passages and prevent it from going down the throat. It takes a little

practice but even young children can quickly learn how to do it. The Himalayan Institute also makes an excellent neti pot additive called Varcho Veda, which contains a solution of zinc acetate plus antiseptic herb extracts, that is added along with the salt in a neti pot or any other type of nasal irrigator.

Instead of a Neti pot, a dishsoap bottle with a large conical top can be used. It must be washed well (and also use one that had a non-toxic soap in it). The ones that have the larger tops will seal in a nostril. A similar process to the Neti is used. Warning: Squeeze the bottle very gently. Do not squeeze the bottle if the nose is so congested the water does not flow and instead creates pressure on the eardrum. The Neti pot avoids this hazard by only allowing gravity feed.

A Nasal Dip is a method that some prefer over a wash. A large plastic bowl (big enough to hold the face, like 6 qts) is filled with water as warm as is comfortable (check with the chin) and a tablespoon of salt. A tablespoon of 3% hydrogen peroxide can be added for more effect against bacteria. The face is immersed and bubbles blown out the nostrils. The face needs to be face down at least 90% so some water will splash up the nostrils. Before blowing, the eyes can be opened and closed a few times under the water to disinfect them, and the solution can be drawn into the mouth, swished and expelled. Garden of Life Clenzology division (formerly Advanced Hygiene) once made iodine and hydrogen peroxide solutions that are added to saltwater in small amounts for dips for infections, allergies, and general hygiene. The Clenzology kit also included fingernail soap, tooth soap, an ear solution, and a sponge. 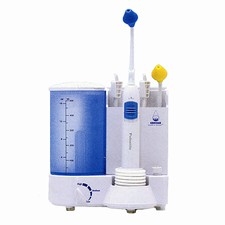 The SinuPulse is an excellent nasal wash system. It is similar to a water-pick, but instead of picks made for the teeth, has a silicone cone on the end of a wand which fits in the nostril. A solution of saltwater is used in the SinuPulse. iHerb sells some excellent saline wash solutions - the one which includes xylitol is especially good. A benefit of the Sinu Pulse is that one can stand upright or nearly so while using it instead of bent over the sink with one's head to the side as is required with a neti pot. The SinuPulse has an intensity setting (just like a water-pick for the teeth), but an excellent feature is that when a nasal passage is too clogged, the pressure produced by the Hydropulse is limited such that it will not harm the ears.