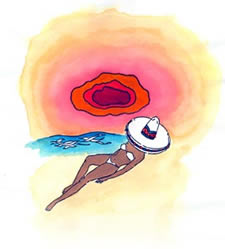 Summary: Some commercial sunscreens which do not contain petrochemicals, cinnamates, oxygenzone or any of the potentially more harmful chemicals are made by Badger, Mexitan, Purple Prairie, and Life Extension. Some nutrients taken internally may help reduce sun damage.

Titanium dioxide and zinc oxide are thought to be two of the safest sunscreens. Instead of being absorbed into the skin (and other body organs) to react to ultraviolet light so that the skin does not burn, as chemical sunscreens do, they keep the light from penetrating the skin in the first place. They are mechanical, instead of chemical, barriers to UV light. Some argue that research shows that micronized titanium dioxide found in some sunblocks may be absorbed by the skin and cause problems, but it still is likely safer than other sunscreen chemicals, which certainly are according to researchers. There are also absorption studies of most chemicals used in sunscreens, and titanium dioxide and zinc oxide, even when in nano particle size, have very low absorption.

Sunscreen chemicals such as oxybenzone, avobenzone, octisalate, octocrylene, homosalate and octinoxate exhibit varying degrees of absorption and potential toxicity in the body. The most common issue with these chemicals is that they can mimic or disrupt hormone production, causing, for example, reduced testosterone in men, increased estrogen in women, and thyroid dysruption. They can also cause skin allergies directly as well as increase the susceptibility to skin damage. Some of the Inactive Ingredients in chemical sunscreens can cause problems, too. A common preservative found in 94 commercial sunscreens as of 2013, methylisothiazolinone, was named the "Allergen of the Year" by the American Contact Dermatitis Society.

The Environmental Working Group (EWG) rates the potential toxicity of some sunscreen chemicals in the article The Trouble with Ingredients in Sunscreens from more to less hazardous. Unfortunately, they do not rank some common sunscreen ingredients like methoxycinnamate and the various salicylates. They report that oxybenzone, one of the most hazardous chemicals used in sunscreens, is detected in nearly every American and has a skin penetration as high as 9%. Here is a summary of the hazard scores shown in the referenced article:

I would stick with sunscreens that have hazard scores of 3 or below, 2 if one has sensitive skin. For further research on sunscreen chemicals, the Campaign for Safe Cosmetics is a good resource.

Note that the Badger product is one of the only sunscreen products which contains only zinc oxide as a sunblock agent while the Mexitan, Purple Prairie, and Shade Factor cream contains both zinc oxide and titanium dioxide.

Life Extension makes two types of sunscreen. They are called Shade Factor and come in both lotion and spray. The lotion has titanium dioxide and zinc oxide as active ingredients. The spray contains the least toxic chemicals: avobenzone, homosalate, octisalate, and octocrylene. Life Extension also makes an internal supplement called Shade Factor that are capsules of nutrients which help minimize sun damage. While more expensive than toxic sunscreens, the Life Extension products are a good value compared to most other safer products, especially when purchasing 4 bottles where there's a price break on their website.

The main problem with most safe zinc oxide and titanium dioxide sunscreens is that they are expensive! The ones described in this article are the budget sunscreens. There are many boutique sunscreens that are safe but that cost as much as $35 for 2oz. A DIY solution can be to make one's own sunblock or sunscreen. An easy and very inexpensive sunscreen can be made oneself with bulk zinc oxide powder and coconut oil. Mix a half cup of coconut oil and 3 TBS zinc oxide with a hand blender and dispense in a canister.

For after sun to heal any damage caused, emu oil is one of the best oils for the skin, is non greasy, and one of the only oils that is totally non-comogenic. Aloe juice is also commonly used.

Note that the zinc oxide in Badger, Mexitan, and Purple Prairie is micronized and will not make the skin as white as using plain zinc oxide powder, although any product that has zinc oxide in whatever form will usually make the skin lighter for a day or two (but this also means that some sunscreen action is still in effect.) Titanium dioxide gives the skin a pearlescent sheen when it is applied too thick but in the Mexitan product, this effect is absent when used in moderate amounts.

Supplemental nutrients help protect the skin from sun damage from the inside out. The most important are likely essential fatty acids (EFAs). Using an omega 3 EFA supplement may help reduce potential skin damage which can lead to later problems. Equally important is avoiding damaged oils in the diet such as hydrogenated oils (margarine and many processed foods) and trans fats (fried foods).

Other nutrients which may provide a protective effect are minerals like selenium, and other antioxidants. Selenium is included in sufficient amounts in most good multivitamins, or just eat two brazil nuts per day, the richest natural source. After ensuring that sufficient basic antioxidants are being consumed such as vitamin C and mixed tocopherols, one can look to the superantioxidants such as curcumin, grape seed extract, alpha lipoic acid, and many others. 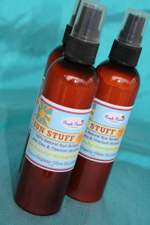