Harmful Fibers Avoidance in the Home

Summary: Address all sources of potentially harmful fibers in the home.

Fibers which can cause problems are asbestos, fiberglass, and rockwool. When they break down they can float in the air and the tiny, glassine threads can be inhaled. This may cause a 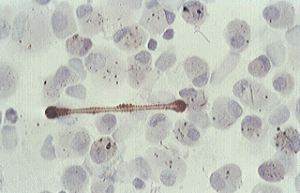 problem in the lungs or elsewhere. The threads, once inhaled, can impale into body tissue and travel throughout the body. According to Clark, they will often be sequestered by scar-tissue-like (tumor) formation (and can also cause breathing problems.) Tumors will be benign, but may eventually become cancerous since they will provide a place where the immune system is less effective and parasites, toxins, bacteria, etc, can gather. Clark states that she typically finds fiber involvement with hard tumors.

The following are Clark's cleanups for fibers, with a few extras, including rockwool in fireplaces, and fiberglass from places not previously suspected, like ductwork and dishwashers.

This is the main source of asbestos contamination in the home. Almost all dryer belts made

outside the USA contain it, according to Clark. She says to look for one made in the USA.

In most dryer designs, even an asbestos belt is not a problem since the air is sucked into the outlet vent, instead of pushed which might blow fibers from the belt through openings in the dryer case. Ensure that the outlet duct does not leak.

The worst situation possible would be to have a dryer with an old, asbestos-containing belt which did not vent to the outside.

Many hair dryers contained asbestos in the past. I have not researched this enough to know for sure which contain asbestos and which do not. The last time I bought one, I looked inside and got the one whose insulation looked the least "fuzzy". I suspect that all the newer dryers, the kind that have the GFI built-in on the plug end, are asbestos free, although I am not sure. One I bought recently was the Conair Euro 1600, which has a non-asbestos channel for the air, surrounded by an insulated casing, and looked safe. The Conair Euro portable appears safe, too. The Conair model with the retractable cord does not.

Do not use fiberglass filters. Although they are probably not much of a hazard after all the fiberglass dust has been blown off initially, if they are left

in too long, they could degrade.

Clark recommends using a foam pad filter, the kind that are used in window unit air conditioners. There are many that do not contain fiberglass, though. I have found ones that have multiple layers of carbon and foam. A better one than this would be a permanent plastic electrostatic filter, aka an allergy-free filter. These cost about $35 but can be sprayed off with a hose and last indefinitely. Aluminum ones like this are also available, but are twice the price.

There are also now available AC filters made of polyester, which is a far better choice than fiberglass. They can be hard to find.

The "fake embers" which are included with gas fireplace logs are spun rock wool and have a structure very similar to asbestos. It is probably even worse, since it is not bound in a mat, but is loose. If one has this, I would at least ensure that glass doors covered the fireplace well and that the flue was kept closed when not in use to prevent downdrafts from blowing it into the living space.

If one's home has fiberglass insulation, ensure that there is no way for it to enter the living space. Check around light fixtures and electrical outlets, door and window frames, fans (especially bathroom exhaust fans) and caulk them up if need be. Caulk or fill any holes in the wall, too, as from nails (although only necessary on the outside walls generally). If there is an automatic dishwasher in the home, remove the base plate in front and remove any fiberglass (sound) insulation. Replace with foam if desired. 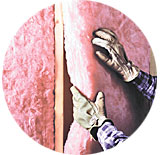 If there is, it is best to have the ducts cleaned. All the grills are removed and high pressure air is blown into the ducts while a hose is attached to another section of ventwork to remove the dust, mold, and other contaminants. Have them leave the grills off. Get a roll of aluminum tape (NOT duct tape whose glue will soon get dry and the tape will come off). This tape is rather expensive at $12 per roll, but one roll should be enough to do a couple of houses. It has a backing which is peeled and can be molded and hold its shape.

Run the tape between the sheet metal which forms the vent header and the wallboard, leaving a lip of around 1/2" outside, which the grill cover will cover when replaced, or otherwise ensure that it will prevent the fiberglass from entering the ducts.