Summary: Use non-toxic insect control and yard care items such as some of the many suggestions below. The cheapest place to buy essential oils plus other recommended oils like neem is Essential Wholesale.

Using commercial lawn and garden products is not much of a problem if proper precautions are taken, such as wearing gloves and a dust mask when applying them and following package instructions. Even pesticides like diazanon quickly break down in the outdoor environment to non-toxic constituents (although there are many initially non-toxic pesticides like pyrethrum and potassium salts of fatty acids that work fine for individual or indoor plants.) 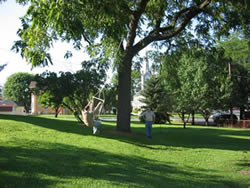 Jerry Baker is a plant expert whose books (like "The Impatient Gardener") contain tonic recipes for plants which are made with less toxic substances than most yard and plant care products. For example, a favorite recipe for the lawn includes beer, dishwashing soap, epsom salts, Listerine, and ammonia. To control insects, tobacco tea is added. To discourage mosquitos, baby shampoo and lemon ammonia can be used. Using his suggestions will reduce the need for chemicals on the lawn as well as save money.

Other good insect repellents include neem, citronella, pennyroyal, and cedarwood oils, et al. I have mixed an ounce of neem oil, and 80 drops each of citronella and cedarwood oils in a hose end sprayer and sprayed roses and fruit trees in bloom. It appeared to work great. I would not spray this mix on fruits or vegetables close to harvest since the taste of the neem oil is extremely bitter.

Persistent pesticides like arsenic and heavy metals which are included in bug and rodent traps can spread into the home. Do not use them. For rodents, use traps.

Leaving a vinegar residue on the counters and all surfaces deters ants. Wipe on a light layer after cleaning with the vinegar glass cleaner.

Boric acid powder can be sprayed where roaches are a problem. Diatomeceous earth is also good to control them and other crawling insects like ants and termites. Insect sprays can be made by making a tea of quassia, cat's claw, wormwood, and other antiparasitics which may not kill bugs, but repel most of them, and is safe to use on pets. Also, see the recipe below for insect control in the yard.

Boric acid powder does not much bother ants, but borax combined in sugar water works well. Terro Ant Killer is a borax/sugar combo that works well. A similar solution of 50/50 borax/sugar can be made by mixing with enough hot water to make a syrup and applying to small pieces of plastic or coated cardboard so it does not soak through, and leaving in areas ants infest. They dry out quickly and should be replaced often.

For fleas on dogs, a good recipe is to get rosemary and wormwood in powdered form and mix equal amounts. Sprinkle as needed on dogs, bedding, and other places flea control is needed. A mixture of oils of citronella, eucalyptus, and cedar makes a good flea repellant. Use sparingly, perhaps putting drops on a brush before grooming.

For lice on pets or people, many report oils of rosemary, thyme, or tea tree work well, combing a small amount through the hair. A strong tea made of thyme can also be used to soak the hair. One herbalist says that any type of edible oil, such as olive oil, can be used to completely cover the hair and left on for 15 minutes to smother the buggers. This leaves a messy cleanup, though. A report on a newsgroup said that people who use hair dryers are much less likely to get an infection. They supposed the intense heat did them in.

From the alt.folklore.herbs newsgroup, here're a few excellent suggestions:

Here is the best and simplest way I have found to control/kill all insects. It is nontoxic and cheap. It works every time, if done properly.

Basically, this technique takes into consideration the reality of the type of lungs which insects have, called 'book-lungs'. These lungs are protected by wax-covered hairs. This is why you can submerge an insect in water, and it will not drown. But if you put one drop of soap into that water, the insect dies immediately, because the soap destroys the integrity of the protective wax, allowing water to enter the bug.

Soap is not toxic to insects, and they will not drown unless there is enough water to drown them. It is the combination of soap (a small amount) and _water_ that is fatal.

For use on food-plants: pour 1/4 cup Ivory SOAP FLAKES into a 2-gallon pump-sprayer, and slowly fill with water. Allow the soap to dissolve.

For general use: Pour 1-oz of liquid dish soap into sprayer and fill slowly.

Use: Spray insects with solution, wetting them liberally. They will die.

Hornets, wasps, stinging flying insects: Adjust spray to 'fan' setting, so that any hornets which fly toward you will be forced to go through the dropletts. They drop to the ground. Spray them some more. You may also force the nozzle into the nest (after dark, please!) and saturate the nest. All will die.

Ant nests and hills: Pour soap-water onto nest or hill. I have seen 3-ft tall hills shrink to nothing in 24 hours.

Remember, this is NOT toxic to the bugs, they simply drown, if you use enough water. I have used this for several years, and have never seen it fail.

Once, I was repairing a shake roof, and discovered a hornet nest in the wood I was hammering on. Ouch! I sprayed the buggers as they issued from their hole, they all fizzled out and died as they tried to fly. One sprayer of solution has lasted me an entire season.

Note that the difference between genuine SOAP and dishwasher solution is toxicity to humans; Ivory flakes are SOAP, non-toxic on food plants.

I have found this to work better than the Pyrethrin-based 'non-toxic' food-plant sprays.

Let me know of your results.

So.....that would explain, perhaps, the oddball luck I've had with occasional fruit-fly infestations?

I found out that if I put a coffee cup out with water, dish soap, and a little vinegar, all the fruit flies went in there and died. Poof, no more fruit flies.

We conducted rather exensive evaluations of various roach treatment protocols some four years ago. Our research revealed that NOTHING we tested was remotely as effective as boric acid containing compounds. The powdered (not granulated) substances worked best. Both ants and roaches clean their feet and they will contact the powder whenever they walk across a line containing the boric acid.

This was the ONLY treatment which proved to be 100% successful---from among seventeen evaluated. Every other chemical/bait system or substance was, to a major extent, excessively toxic to the environment, orders of magnitude more expensive----and not long-lasting in effect.

Our conclusions were objective in nature and clear in nature. The "ROACH CONTROL BUSINESS" appears to be one of our nations' most sorrowful scams----preying most heavily upon inner-city, captive populations, through a combination of political opportunism and economic self-service.

We conducted both laboratory (in-house) and in-situ (heavily infested homes and apartments) evaluations. Even in the most heavily infested dwellings, total control was effected within 30 days-----with ONE application of ANY of several boric acid containing compounds.

The "Roach Control Business" is an unconscionable chapter in our recent civil/moral history-----especially relating to our treatment of those trapped within the poverty-stricken inner-city wens of the U.S.

We are not a "bleeding-heart", social-reform group---just a group trying to aid humanity in our own, limited, way. However, the "Roach Problem" in America is quite easily solvable---it is just not politically/economically desireable to do so.

The foregoing litany of philosophical rhetoric is solely my own, and, hopefully, does not detract from our group's quantitative researches. Please do excuse my emotional outburst on this topic----but the circustance is such a mis-carriage of civil justice......I was compelled to comment.

There is a product, by the name of Roach-Prufe or similar spelling, that is available in many hardware or farm stores, that is manufactured by the people who patented the general protocol system. We had some difficulty, initally, in locating a source---the hard-chemical folks have done a very effective job of limiting easy public access to such useful and economic substances.

Two posts from the rife list on ant control:

There have been numerous discussions on these lists about this in the past 6 months, and for the life of me, I can't understand why problems still exist. Take 2 packs of Nutrisweet, or whatever is free at McDonalds, open them and put them in the room, or rooms where the ants abide. They will be gone in 24 hours. 3 people I know have tried
this with success. One outfit is repackaging the stuff which is aspartame, and selling it as ant poison. I am sure all this info, and more, is in the archives. Harry

> I am being plagued with Ants. I can't use chemical killers. My aromatherapy work temporarily, but not as a permanent deterrent. I am considering purchasing an electronic "Pest Control" device. They say it is safe for people and pets.

You could give the pest control device a try, ensuring that you could return it if it did not work well enough. They sell varying sizes of the "regular" ultrasonic ones at Home Depot for pretty cheap, and says right on the package "money back guarantee."

To get rid of ants, you need to treat the outside of the house, too. For the severe chemically sensitive, one of the better ways is to put coffee grounds around the foundation. You can call the local Starbucks or other local coffee shop and see if they will save a day's worth of grounds, which is plenty (you might have to bring them a five gallon bucket to fill). Coffee also acidifies the soil around the foundation which is good since it is usually too base for most plants from the concrete leaching, plus it encourages earthworms.

For inside the house, get Terro, which is boric acid mixed with sugar water. It can also be made oneself with boric acid from the health food store or in 100% boric acid roach powder. The sugar solution must be replaced often since it dries out every few days. You put a little puddle on some plastic, styrofoam, or non-porous paper. On porous paper, it soaks right in and is ineffective.