Summary: Wear no jewelry where metal touches the skin. Use enamel coated or glass cookware for long term use. Use lexan utensils when possible.

Heavy metals disrupt metabolic function in two basic ways: First, they accumulate and thereby disrupt function in vital organs and glands such as the heart, brain, kidneys, bones, liver, etc. Second, they displace vital nutritional minerals from where they should be in the body to provide biological function. For example, enzymes are catalysts for virtually every biochemical reaction in all life-sustaining processes of metabolism. But instead of calcium being present in an enzyme reaction, lead or cadmium may be there in its place. Toxic metals can't fulfill the same role as the nutritional minerals, thus their presence becomes critically disruptive to enzyme activity.

Many metals are necessary in small amounts for health, like nickel, iron, copper, etc. However, this is only if the metal is in a form which is absorbable and usable by the body (trivalent vs hexavalent, e.g.). Otherwise, it is treated as a toxin, and removed by the white blood cells. If the elimination of that particular substance is somehow hampered, as when the kidneys are full of crystals and stones or the liver is compromised, it can accumulate in certain parts of the body. This may lead to compromised immune function in those areas and leave them more vulnerable to chronic parasitic or bacterial infection, as well as cause the cells to absorb less nutrients and oxygen, possibly increasing cancer risk.

Many processed foods contain hydrogenated oils. This is to increase the shelf life since it prevents the oil from going rancid. Besides the health effects of the hydrogenated oil alone which make it worse than saturated fats, hydrogenation occurs in the presence of a toxic metal for a catalyst, like nickel or aluminum, and small but measurable amounts are included along with the product.

Stainless steel also contains nickel and chromium, both of which can be stored as toxins in the body. Good quality hard stainless leaches these ingredients less than poor quality. There is a difference in opinion on which is safer - the magnetic or non-magnetic type of stainless steel. Some say the non magnetic, since it is harder and less likely to leach any metals, is safest. Some say that the magnetic type is safest since it has more iron and less nickel (some even have no nickel) and nickel is the most toxic metal in the stainless steel. To be safest, avoid ingesting or absorbing as much metal as possible, and avoid even stainless steel. However, if it must be used, it is the opinion of eRegimens that the non-magnetic type is best.

Non metal utensils and vessels are available. Heavy duty Lexan plastic tableware is inexpensive. It can be purchased at scoutstuff.org or at the Dr. Clark Store, and can often be found at Walmart in the camping section even cheaper.

Ceramic coated cooking vessels are good, as is glass cookware, like Corning. Le Creuset, Prinz, and Pfaltzgraff make enamel coated cookware. Aluminum is also treated as a toxin by the body, and since cooking vessels made of it scratch easily, it is a poor choice. Teflon coating is okay for very occasional use if not heated excessively, but if a pan is to be used a great deal, it is best to get ceramic coated. An inexpensive complementary to the high priced cookware like Prinz and Le Creuset are those blue-with-white-speckled coated pots and pans. They are available at some stores in the cookware, but usually more often in camping supplies. When any coated cookware chips or otherwise exposes the metal, replace it.

When using pots and pans, never use a metal utensil to stir or serve. High heat plastic utensils are available. Calphalon makes plastic utensils which do not deform under high heat, forming ridges and pockets where bacteria may breed.

If one wears a watch, thin clear plastic film or tape can be used to coat the metal back to prevent it from touching the skin or better yet get one of the widely available watchbands (like at WalMart) where the nylon webbing runs behind the watch. If one works with tools a lot, rubber coating is available into which to dip tool handles.

Aluminum is used as an anti-caking agent in most salts. It is not used in KAL Real Salt, Hain Sea Salt, or Baleine salt. Avoid aluminum in deodorants and antiperspirants. Do not consume beverages from aluminum cans. Avoid food from "tin" cans when possible. 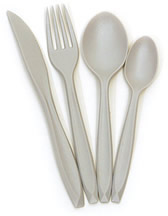 Metal plumbing is a problem from the copper and other metals which it can leach. Copper is not as much as problem as solder joints on older houses which can contain lead. Galvanized pipes are also a hazard, according to Clark. If there is metal plumbing, filter through carbon if possible before consuming.

Gold can accumulate in certain parts of the body, notably the reproductive organs. Long term exposure can cause problems, especially in the uterus, testicles, prostate, and pancreas.

Mercury is one of the most toxic metals that accumulates in the body. Of course, mercury fillings can be a problem as can the preservatives in vaccines, and these appear to cause the majority of acute problems. These are differences in recommendations among complementary health advocates regarding mercury fillings (also known as "silver" fillings). Some say that any mercury in the mouth should be removed as soon as possible. Others say that once fillings are in there for a few years that it does more harm than good to remove them. I tend to agree with this latter statement. I have known people who appeared to be making progress against disorders that are possibly exacerbated by mercury in the tissues, like MS and ALS, do much worse after mercury fillings were removed. This may be due to the large amount absorbed when they are drilled out. If they are to be removed, it would be prudent to use a heavy metal cleansing regimen before and

after to possibly reduce the accumulation. This would be to use high dose C, plenty of water (The Water Cure), fresh cilantro (eat a bunch per day), and use a chlorella supplement. Alpha lipoic acid may also help in this regard. RenewLife also makes a product called Heavy Metal Cleanse that may be a good adjunct.

Dr. Mercola (www.mercola.com) states that eating fish, not dentalwork, is the major source of mercury exposure. He recommends using molecularly distilled fish oil (except for the worst department and drugstore types, all of them are this type these days) instead of eating fish. But, these fish are supposedly the least likely to be contaminated with mercury: Summer Flounder, Wild Pacific Salmon, Croaker, Sardines, Haddock, Tilapia. The longest-lived fish accumulate the most mercury and these include shark, swordfish, and tuna.

On the other hand, Hulda Clark says dentalwork, not eating fish, is the major source of mercury exposure.