Limit processed foods. Wood and isopropyl alcohols are often used to clean the processing equipment and significant amounts may remain in the product. 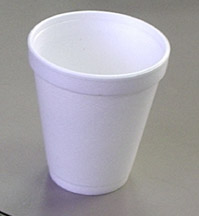 Benzene is even worse than isopropyl alcohol. It is primarily used to extract natural flavors and oils and it and another toxic solvents, hexane, is contained in flavored foods, highly processed cooking oils, some bottled water and fruit juices, ice cream and frozen yogurt, and chewing gum. It is also found in many health care products.

Avoid styrofoam, a source of styrene, when possible. Do not make a habit of drinking coffee from a styrofoam cup or heating foods in styrofoam containers.

Many processed foods contain hydrogenated oils. This is to increase the shelf life since it prevents the oil from going rancid. Besides the health effects of the hydrogenated oil alone which make it worse than saturated fats, hydrogenation occurs in the presence of a toxic metal for a catalyst, like nickel or aluminum, and small but measurable amounts are included along with the product. Avoid them.

Many grain products contain molds. The molds themselves are not toxic, it is their byproducts. Among the worst mold byproducts are mycotoxins, one of which is aflatoxin, and are quite common in small amounts. Some mycotoxins are among the most poisonous substances known, and even the common ones have many harmful effects. Much of it is on the liver, but other organs are affected. However, they are mainly detrimental to the immune system. Large amounts of

immune cells are destroyed in their fight to combat them. Much of the damage seems to be to the lymphocytes, which include NK (natural killer) and T-cells, which combat serious illness. They are also a trigger for mundane illnesses like colds.

Any grain processed product is likely to contain molds, especially those with wheat or corn flour. Whole wheat is worse than processed since the outer hull is most likely to harbor mold. Even though stripping the outer layers removes most of the nutrients, especially magnesium and B vitamins, as Clark says, in a contest between nutrition and the immune system, the immune system comes first. Yes, this means that white bread is typically healthier, or at least less detrimental to health, than whole wheat bread. It is beneficial for most people to avoid most wheat products anyway (see "Eat Right For Your Type" and "The Zone Diet " in the Diet section) since they contain harmful lectins, which also adversely affect the immune system. Whole wheat contains more of these lectins than processed. Corn flour is usually cleaner than wheat, but can have problems, too.

A recent conversation with a guy who grew up on a farm which grew wheat provided further information on this topic. He said, yes, the wheat does get moldy when it is stored for so long, but that is not the main reason I don't eat whole wheat. It is because the farmer stands there as the grain is being transferred to the silo and throws in periodic handfuls of sevin dust (insecticide) as the wheat goes by, to limit insect damage when it is being stored. 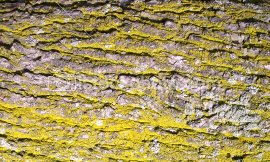 Peanuts can be especially bad. Brown specks in peanut butter are sometimes moldy nuts which contain aflatoxins (they can also be the skins of the peanuts, if that is included in the processing). Peanut oil is made from peanuts that fail the quality test for peanuts to be sold whole, so should be avoided. Non-health varieties of peanut butter often contain hydrogenated oils (and sugar). Walnut Acres is a company which sells peanut butter which is alflatoxin tested to a high standard. Hulda Clark says peanut butter is okay if ascorbic acid is mixed into natural peanut butter to detoxify the potential mold. (Some blood types should avoid regular use of peanut butter, especially Os, because of their lectin content).

There is mold in some dairy products, intentionally in some cheeses, but these do not produce toxic byproducts according to Hulda. There is not much mold on small-bakery products where plastic is not used to wrap the items, and Clark finds unwrapped Mexican bakery items the cleanest of all. White flour made in the US is generally mold-free, too, she says.

It is the liver's job to detoxify these types of toxins in grains. Taking in too much at one time can cause serious liver damage. It usually does not have problems with small amounts unless the liver and gall bladder's functions are compromised by too many crystals, stones, or toxins. The molds also "gag" the immune system while it handles them, and while it is occupied, viruses and bacteria can get the upper hand. The surest way to catch a common cold is to eat moldy grain products when those around you are sick. 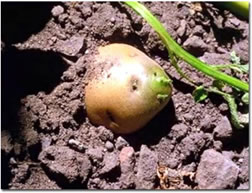 The liver can be helped detoxifying the mold toxins by adding vitamin C to the diet, preferably whenever potentially moldy food is eaten. Better yet is to add the vitamin C to the product before it is cooked and eaten to detoxify beforehand, and not place the burden on the liver. Vitamin C helps neutralize toxins directly in food plus helps the liver after the food is eaten.

Fresh baked bread does not have mold. Store bought bread wrapped in plastic almost always contains molds on the fourth day after the bag is opened, according to Clark. The moisture contained in the bag contributes to the mold problem. Keeping unwrapped bread in a breadbox without plastic slows mold in forming, but it goes stale quickly. If a lot of bread products are eaten, it is best to buy a breadmaker, add 1/2 tsp vitamin C before baking (on the bottom with the salt, away from the yeast), and keep the bread in a breadbox or otherwise not tightly sealed so moisture can escape. Freezing fresh bread prevents molds from forming. 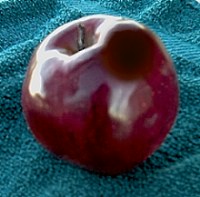 Fruits and vegetables should be washed well before eating. Do not eat bruises on fruits, a source of patulin mold. Keep fruits and vegetables which are kept in the refrigerator in their plastic bags when possible so as not to contaminate a whole refrigerator drawer full if one thing molds. If there is any mold in a bag, throw all the produce in that bag away. Clean out the refrigerator often, and wash off shelves and walls in it with baking soda or other safe cleaner.

Berries and grapes can be moldy. If they are not perfectly fresh and firm when purchased, soak them in water with a bit of vitamin C. Do not purchase berries in a package that does not allow air flow. For example, ones wrapped in air tight packaging get moldy much faster than those in those small plastic bins with air holes.